Tom Hanks portrayal of Mister Rogers in A Beautiful Day in the Neighborhood is so realistic one almost feels like Mister Rogers is still with us. It’s such a glorious film. If you’re lucky enough to see it make sure to have a tissue in hand. I’m tearing up just writing this. I was a mess during the actual film. It’s message is so timely given the current state of the world.

The beauty of Fred Rogers was how he never lost faith in humanity. For thirty years he taught children the importance of kindness, love and forgiveness. Those themes are reiterated in the film which focuses on the friendship between Mister Rogers and journalist Tom Juno. The two meet when Juno is tasked to write an article on the beloved hero of so many of our childhoods. I can’t praise this movie enough. It’s surprisingly dark in places which makes the sweeter moments more poignant. Here’s the trailer, followed by a few of my favorite quotes from the film.

“To die is human, and anything human is mentionable. Anything mentionable is manageable.” – Fred Rogers

“Do you know what forgiveness means? It’s a decision we make to release a person from the feelings of anger we have against them.” – Fred Rogers

“Sometimes it’s hardest to forgive the ones we love.” -Mr. Rogers

“Just take a minute and think about all the people who loved us into being.” – Mr. Rogers

“I think the best thing we can do is to let people know that each one of them is precious.” – Mr. Rogers

“He’s just about the nicest person I’ve ever met.” Tom about Fred

I just recently watched the documentary “Mister Rogers and Me” and thought I’d share a few of my favorite neighbor’s quotes. See below. What an exceptional man he was. He definitely changed my childhood for the better. The world could use his wisdom and kindness right about now. Miss his goodness.

“Love isn’t a state of perfect caring. It is an active noun like “struggle.” To love someone is to strive to accept that person exactly the way he or she is, right here and now.”

There is something of yourself that you leave at every meeting with another person.”

“There is no normal life that is free of pain. It’s the very wrestling with our problems that can be the impetus for our growth.” 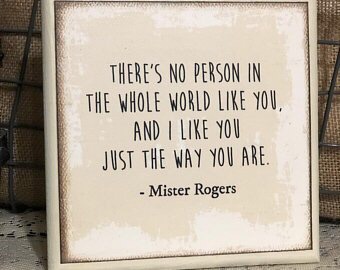