Stigma has long surrounded mental illness and is rooted in a lack of understanding and ignorance. It’s important that we as a society become informed and educated about what mental illness truly is. Here’s a clue- it’s not called an illness for nothing. It’s an ailment and a disease. Andy Behrman’s Electroboy: A Memoir of Mania is one book that helps shed light on mental illness, specifically bi-polar disorder. Andy’s book reads like a Quentin Tarantino film with a dash of Steve Martin thrown in. I defy you to read this book and not come away reeling.

Fueled by his mania, Andy was on a collision course with disaster including: drugs, illicit sex, prostitution, aimless globetrotting, and art forgery along with a stint in jail. Did I mention illicit sex? I did, well I mean some downright kinky and risky stuff. It’s amazing Andy lived to tell the tale. This, my friends is the reality of bi-polar disorder: self destructive behavior, substance abuse, promiscuity, extreme highs and crushing lows. It’s brutal.

Andy has been battling this debilitating disease for the better part of his life. Misdiagnosed for years, he was prescribed a pharmacy’s worth of prescription drugs meant to stabilize his moods and help him function, but to no avail. As a last resort his doctors had him try electroshock therapy. After many rounds, he’s now stable and thriving. But what a journey to get there. In a head spinning and roller coaster ride of prose, Andy chronicles his bouts of mania and depression. His words mirror the disease itself. You’ll get a taste of the bitter pill that is bi-polar disorder. Andy is shockingly honest and real. He holds nothing back. Electroboy: A Memoir of Mania is disturbing, poignant and eye opening read. Andy doesn’t just explain bi-polar disorder, he makes you feel it.

To learn more about Andy Behrman please visit his website at http://www.electroboy.com
And you can find him on Twitter at https://twitter.com/electroboyusa

He’ll also be joining us on our podcast La Literati in March. Details, coming soon. 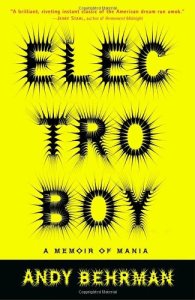 6 thoughts on “Andy Behrman Electroboy: A Memoir of Mania”